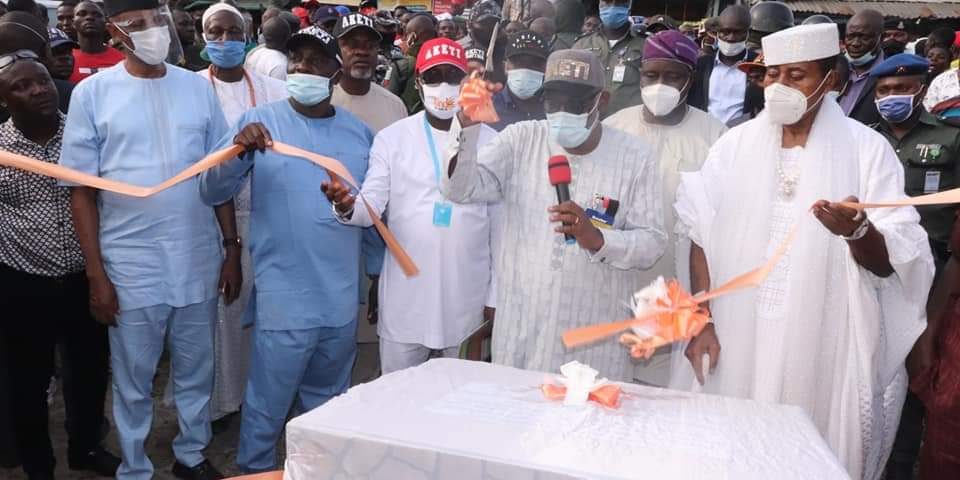 The project which is the second phase of a multi-billion naira water project with its treatment plant located at Aboto and has pipes connecting several communities is aimed at providing potable water to various communities in Ilaje Local Government Area.

While commissioning the project, Governor Akeredolu stated that a lot have gone into the continued quest for the distribution of potable water across the Ilaje Local Government Area. He assured the people that his administration would continue to do more for the Southern Senatorial District.

The Governor added that his administration delights in prioritizing the welfare of the people, hence, the massive infrastructural development across the 18 Local Government Areas of the State.

He further explained that the successful linkage of the Ilaje Local Government with Lagos State through the construction of the Araromi-Akodo, Ibeju-Lekki road project would open up the entire area for massive development.

He also added that the proposed Erunna-Ogboti Free Trade Zone and the Ondo Deep Sea Port would as well greatly contribute to growing the economy of the Local Government and the State at large.

In his address, the OSOPADEC Chairman, Hon. (Barr.) Olugbenga Edema, welcomed the Governor and appreciated him for his support towards the completion of the project through his approvals and timely release of funds.

Edema lauded the Governor for not perceiving the project as having been conceived by his predecessors as common among political office holders but rather saw to the actualization of the project for the benefit of the Ilaje people.

He noted that there were two contracts involved in this water project. The first contract in this Lot was the construction of Raw Water Intake (Two million gallons per day) and Water Treatment Facility at Aboto. The second contract is the construction of 45.61 km Water Rising Mains and Pipe Laying along the Igbokoda–Ugbonla Road Project which was being commissioned.

Concluding his address, Hon. Edema assured the Governor and the people of Ilaje that the water emanating from the project has gone through all series of necessary tests and have been declared fit for human consumption and also, a robust architecture for maintenance of the project have been put in place for its sustainability.